Masons of Yorkshire: spirit of the phoenix 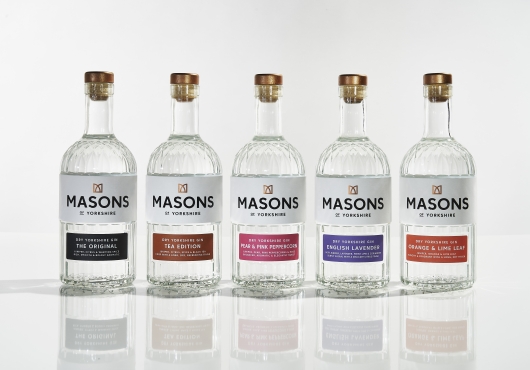 It’s been a strange year, but some days in the workplace are more surreal than others. For Jody Craddock and the rest of the team at Masons of Yorkshire, watching three of the most powerful people in the country stroll around the bottling line will long stick in the mind. It was July when PM Boris Johnson, Chancellor Rishi Sunak and Home Secretary Priti Patel visited the distillery to sniff the aromatic botanicals used to flavour the iconic spirit and show support for Britain’s fine food and drink sector. “It’s probably the weirdest day of my career so far!” says Jody, who is marketing manager at the upwardly-mobile enterprise. “As our constituency MP, Rishi has had a relationship with us for years and years, but it was a real boost to be chosen for such a high-profile visit. The last two years have been a real rollercoaster, so it was quite a highlight for our team and the local community.”

The highs and lows have certainly been extreme. In 2019, a devastating fire posed an existential risk to the distillery, but saw locals and friends in the industry rally to rebuild. “The community was coming to us with chairs and laptops and stationery,” recalls Jody, “and even direct competitors let us use their still while we got back on our feet. People honestly came together more than we could have imagined.” Then, as the business began to hit its stride with a special ‘Phoenix edition’ dry Yorkshire gin raising funds for firefighters, Covid hit. “Like every business in the UK we had a ‘what’s going to happen?’ moment,” says Jody. “The on-trade made up a third of sales so a big chunk of the business was affected straight away. We were worried for our workforce – our main concern was our staff.”

Finally for a dash of luck: the distillery‘s new e-commerce platform had gone live in February 2020, and became a thriving hub of activity for gin connoisseurs keen to avoid the shops. Meanwhile production switched to hand sanitiser for anyone who asked – local care homes, the NHS and a local RAF base – cementing the community ties forged in the aftermath of the fire. “The whole experience has left us with a really big ambitions for the next five years and where we want to be,” says Jody. “Having been through two big setbacks it’d be easy to take a step back, but Karl and Cathy want to move things forward as much as possible. We won’t be resting on our laurels.”

The passion of founders Karl and Cathy Mason – gin lovers emboldened by a 2009 change in legislation that allowed small-batch distilling – shines through in every bottle. The company grew from the grassroots of the ‘ginaissance’, emerging from a Facebook page set up by Cathy and Karl to share cocktail ideas to a commercial distillery creating Yorkshire’s first gin. Now, eight years on and with a core range of five gins under its belt, the business is pushing ahead to new frontiers. “Our new site in Leeming Bar has a gin laboratory,” says Jody. “That’s something Karl and Cathy had hankered after for ages! Innovation is at the heart of the business so we’re looking forward to exploring new flavours, new methods, even new spirits. We’ve launched three new special editions already this year, but we’ll be slowing down as we focus on an exciting new direction.” Jody hints that new categories may be ripe for a little Masons magic later in 2021. Whatever innovation the team at Masons has in mind, it’ll carry the fighting spirit forged through fire and adversity.