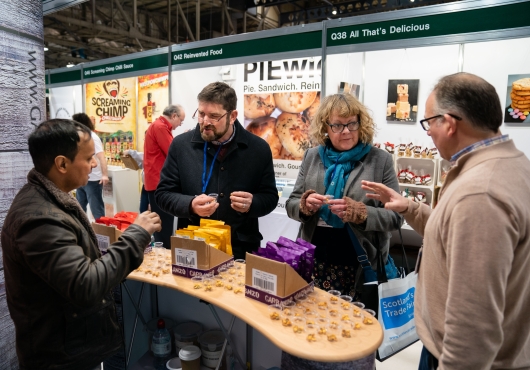 The event – the only large-scale food trade show in Scotland next year – will be held 23rd-25th January at Glasgow’s SEC and will feature around 100 exhibitors showcasing the best of Scotland and beyond.

“Although the food and drink industry hasn’t been as badly hit as retail, it’s still been a very unsettling 18 months, so we are delighted to be back in January,” said show director Mark Saunders. “Interest in the show from potential exhibitors has been positive and we are pleased to be showcasing many new and innovative producers from Scotland, the UK and beyond.”

During 2021, Scotland’s Trade Fair Online sought to keep suppliers and retailers in touch with online product directories and live product sessions, but face-to-face interactions between suppliers and buyers have been missed over the last 18 months. “However much online ordering has advanced recently, nothing quite beats seeing and tasting the products in person, networking and re-connecting with the industry,” said Mark. “We look forward to welcoming you all on 23rd January.”

The 2022 show will feature new producers as well as the Best Product Awards, workshops, talks and networking opportunities. For more information, head to scotlandstradefairs.com