Mark White has launched the annual Groceries Code Adjudicator survey. In his first year as GCA he is keen to receive early information about how the sector is operating in such challenging times.

Taking part in the survey is a valuable opportunity for suppliers to tell the GCA about any Code issues they are facing and whether the regulated retailers they supply are treating them fairly and lawfully. For the first time the survey will also ask suppliers to provide positive feedback about their retailers as well as saying what has not worked so well.

The GCA, which regulates the relationship between the UK’s largest supermarkets and their direct suppliers, has commissioned a survey from independent polling company YouGov for the past seven years. From the beginning, it has played an important role in helping the GCA to achieve progress for suppliers, demonstrating where retailers’ efforts have improved Code compliance and identifying areas for them to make improvements.

This year’s survey – the eighth – will be especially helpful in setting the framework for the work of the new GCA, Mark White, who took on the role in the autumn of 2020. 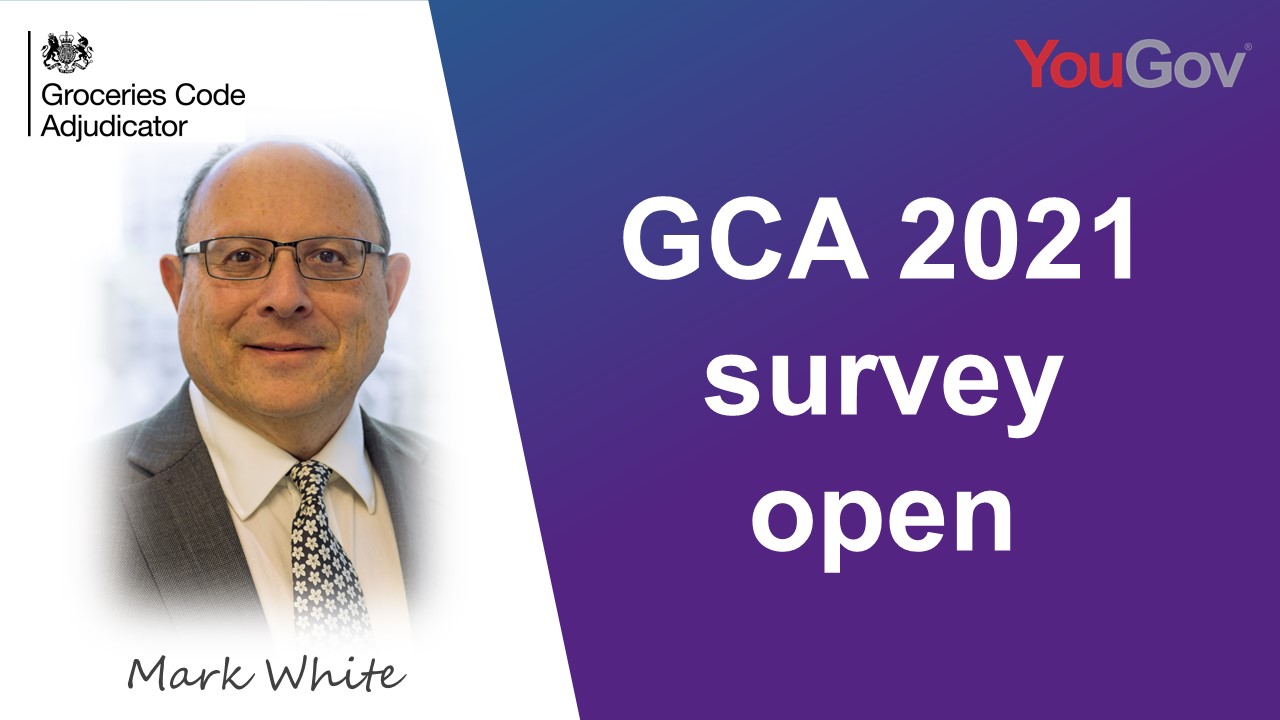 Mark White said: “This survey will be immensely valuable in helping me identify the issues the groceries sector is facing as well as guiding my future work. What suppliers can tell me is particularly important as this is my first year as GCA and the sector is still working under the challenges of Covid and Brexit so I am asking them to be as frank as possible. Their answers can help their businesses.

“I am particularly keen to hear from small and specialist producers as I know from previous surveys that micro and small companies have lower awareness of the Code and the work of the GCA.

“I have decided to include two innovations this year. First, I would like to hear from suppliers who think the retailers are doing a good job so I can highlight success and share good practice.

“Second, after the main survey has closed, I will be asking YouGov to carry out some detailed interviews with suppliers on particular issues arising from the findings. For example, in the last survey just over a third of respondents still reported Code-related issues even though the results showed progress across many areas. I would like to understand more clearly why this is the case.

“If you supply one of the regulated retailers and are interested in taking part in these interviews please provide contact details at the end of the survey. As with survey responses any information gathered from follow-up interviews will be treated with complete confidence.”

The survey closes on 21 February. The GCA will publish the results later in the spring/summer on its website as well as in a special edition of “News from the Adjudicator’. You can register for the GCA’s newsletter here.

The regulated retailers are: