What Britain’s cheesemongers can learn from Europe 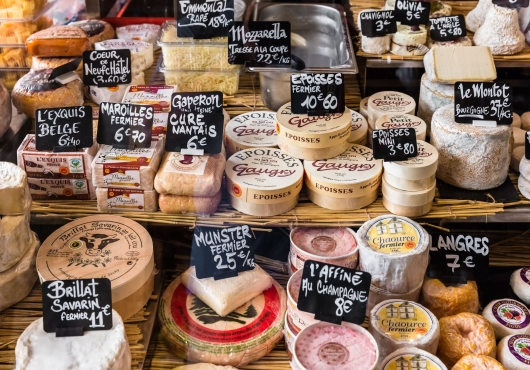 When it comes to relations between Great Britain and Europe, ‘it’s complicated’ just about covers things right now. Our nearest neighbours loom large in our food culture, sharing fabulous techniques, precious skills, and some friendly competition over who can really claim to make and sell the world’s finest cheeses.

What with Brexit and vaccine nationalism, and worrying friction around trade, relations with our Continental cousins have become strained, and yet there are lessons to learn from some of the oldest and finest cheese-producing regions of the world.

One measure that may put Europe’s best cheese sellers ahead might be longevity. Britain’s population of speciality cheese sellers have experienced dramatic plot arcs in the last few decades. With the post-war drive for productivity killing off small herds and the heritage recipes made with their superior milk, the scene was set for supermarkets to champion block Cheddar to a public who valued convenience and cost over quality.

We have lived through a renaissance in micro dairies, artisanal cheese production and excellent cheese counters but are arguably still rebuilding consumers’ skill at shopping small, while France’s fine foods have enjoyed long decades of investment and are only now feeling the cold wind of homogenisation.

“I do think Europeans are better at talking,” says cheesemaker Stacey Hedges, a well-travelled Aussie whose soft-rinded Tunworth and Winslade cheeses are made in rural Hampshire and sold into European markets by Neal’s Yard Dairy. “The consumers there are more used to going into a shop and speaking to the specialist behind the counter. Brits need to overcome their timidity.”

It’s a fair point. National stereotypes aside, there’s an unmistakable ebullience on display at fromageries, Käsereis, fabrica de quesos and formaggi of Europe. “Of course the Continent has so many countries that have different ways of selling,” suggests Stacey. “But I think when the British look to Europe in terms of selling cheese they really look to France, where specialist cheese shops are on the decline. In the last few years we’ve seen some really fantastic independent cheese shops open in the UK, and they’re really going great guns, but there is that timidity in the British public that we don’t see in Europe.”

Stacey’s own favourite experience of French cheese is a market in the Loire where the owner of a small herd of goats sold her own cheese direct to the public. “People on the Continent are much more confident in asking questions and having a chat. Here, we’ve lost that because we’re so used to going to supermarkets where you can do your whole shop without talking to someone. Supermarkets have had such a monopoly here for such a long time. It’s about making that customer feel comfortable. Not feel stupid if they ask a stupid question. It’s a two-way exchange. If the person behind the counter is at all patronising or snooty it’s not going to make the customer feel too good, so I think it is about education on both sides.”

In the UK, the divide between farmhouse cheeses and commodity type blocks of territorial recipes has generally been pretty stark, giving the selections in our delis, farm shops and cheesemongers a clear differentiation from supermarket ranges.

For Alessandro Keder, an Italian who moved to the UK 10 years ago to run Italian deli delivery business L’Incontro with his sister Roberta, this divide is problematic. “The main thing in England is that the finest cheese is quite hard to find,” he suggests. “In Italy you don’t need any special knowledge to find specialist cheeses; in England it’s harder. Unless you’re quite fond and know a bit about it, it’d be harder to find something good. In Italy we have a very, very strong focus on quality. Everything you find has to be a certain quality. Of course in England there is quality but it’s a range. You have to hit on the right cheese, the right producers… whereas in Italy it would be pretty sure buying anything really.”

It’s reasonable to conclude that the exclusivity of our best cheeses, their niche appeal, is a USP, but the danger of appearing elitist – and limiting one’s audience to specific economic groups – is real. “In Italy our culture is based around food, not class,” says Alessandro. “An artisanal shop is run by the cheesemakers and they welcome anyone. They’re proud of the products and they want to show them off; they don’t care who you are. They would be so happy to take the time to show people around, explain how things are made. I went to a couple of factories for Parmesan in Emilio Romana and the people were so friendly. The passion they showed us; you could see in their eyes they were just happy for us to be there. That’s important. If I’m no expert and go in a shop not knowing anything, if I feel unwelcome there I’m not going to buy, am I?”

Perhaps in a country where quality is a given and the buying public from all walks of life have a closer relationship with the production of excellent cheeses, there’s less of the formality that intends to evoke quality but can be experienced as the theatre of class.

“In Italy we don’t treat food like products but more of a passion. It has a value to us that’s nothing to do with the financial value. The passion the producers have in their products – you can feel it. Maybe because there often aren’t as many steps between producer and final consumer.”

At his Amsterdam store Willicroft, cheesemonger Brad Vanstone benefits from the natural curiosity customers have around his range, which is entirely dairy-free.

“We’re very lucky because the people coming into our store ask great questions,” says Brad. “We don’t have to feed them the information because they bring brilliant points. We will proactively do things like taste cheeses, invite feedback and so on, but a lot happens organically. With cheese, taste is so important. Meat or milk is an ingredient, but with cheese it can be the centrepiece of a meal and people get protective over the quality. It’s a hedonistic product, I think, so the bar is high. Sampling has been really tricky for the last year, so that’s a struggle but our retail strategy long term is more sampling.”

The experience of bringing plant cheeses into the world’s oldest centres of dairy cheese is a valuable lesson in piquing interest among shoppers who may feel they’ve seen it all before. Cheese retail in Amsterdam is increasingly dominated by tourist traps piled high with vac-packed Gouda or Edam, so cutting through takes real skill.

“That’s a recent tourist phenomenon,” sighs Brad. “Amsterdam has been absolutely hammered by cheese stores that have a load of Gouda that tourists will take away with them. But step outside Amsterdam, and across the country there are 1,000 specialist cheese stores. Gouda is 55% of all cheese sold in the Netherlands, and is a huge part of the Dutch diet, but you do see a lot more outside of Amsterdam. There are so many more markets here where people get the weekly shop.”

Brad’s also finding that messaging around sustainability is landing with consumers. “Our new products will have the emissions on each product,” he points out. “It shows the consumer and also the industry: this is where we are at the moment. Yes, we want to improve but it’s a starting point. For us that’s really about shouldering our environmental responsibilities.”

It’s also an important way to engage with younger shoppers keen to use their disposable income in a way that upholds their ethics. With passions around climate change rising globally, offering conscious consumers a solution to their concerns around food sourcing is a trend that’s here to stay.

“In the UK you have discounters or high-end sellers,” says Brad. “In Holland everyone’s price sensitive so we don’t have that disparity. People expect to pay less for their foods; that definitely applies to markets. Germany even more so; Holland is kind of between France and Germany. People are tight on food budgets.”

It’s the same story in Denmark, where quality is tallied with a close focus on value. Interestingly, multinational co-operative Arla has played an important role in seeding native cheeses to compete with Italian and French imports, quietly working with cutting-edge chefs driving the new Nordic cuisine over the last two decades to create an exciting new wave of homegrown artisanal cheeses that now populate indie retail cheese counters.

“It’s a big brother, or big sister approach,” says Ulrik V Hansen, an outgoing senior sales manager for Arla based in Denmark. “As the loudest voice in the industry we were able to open doors for small dairies to create a nice environment for special cheeses to be developed in Denmark. It’s been about creating a melting pot.”

The project, Arla Unika, has pushed quality up the agenda for Danish shoppers –  an outcome any retailer would be pleased to embrace. Reports that the food culture of ‘old Europe’ is being eroded by the march of supermarkets is troubling, but as long as the ancient cheesemakers and sellers of the Continent continue, there’s good reason to look forward to research trips around cobbled markets and marble-countered malls when travel restrictions lift.

“It’s easy to look at Europe with rose-tinted spectacles,” conclude Stacey. “Particularly France where we like to imagine people still shop every day at the bakery, cheesemonger, butchers and so on…but there is a willingness to pay for quality.” Long may it continue.