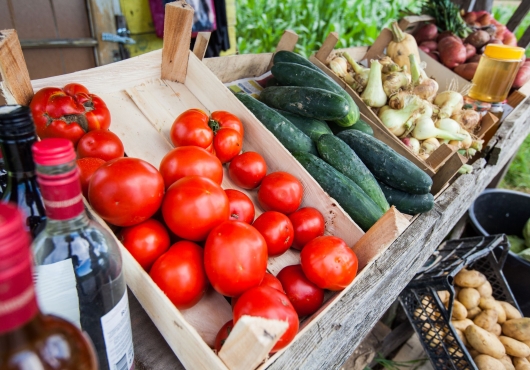 “The food system we have today is both a miracle and a disaster.” So opens the much-anticipated National Food Strategy Part Two. The independent report was commissioned by the Government in 2019 and is led by Henry Dimbleby, the co-founder of Leon Restaurants. It argues that the food Britain eats, and the way it is produced, is doing “terrible damage” to the planet and public health.

The report contains a series of recommendations for how the Government can create a better food system, including:

• Introducing the world’s first Sugar and Salt Reformulation Tax and using revenues to get fresh fruit and vegetables to low income families.

• Guaranteeing the budget for agricultural payments until at least 2029 to help farmers transition to more sustainable land use.

• Defining food and environmental standards for trade and setting mechanisms for protecting them.

• Investing £1bn in innovation to create a better food system.

• Trialling a ‘Community Eatwell’ programme which would see GPs prescribe fruit and veg to improve diets.

“We need to value the food we eat”

NFU president Minette Batters said the food strategy should be a “wake-up call for us all that we need to value the food we eat. We need to put balance back in our diet and have a renewed emphasis on eating natural, whole foods; the kind British farmers produce in abundance.”

Mark Bridgeman, president of the Country Land and Business Association, added that the strategy highlights the need to properly reward farmers for environmental improvements and recognises Britain’s world-class environmental and animal welfare standards. “It is precisely because of these standards that the Government and industry can argue with confidence that consumers should buy British meat, fruit and vegetables as part of a healthy and environmentally conscious diet,” he said.

“Our diets must adapt”

The report’s statements around reducing meat consumption are likely to be one of its most controversial takeaways. Minette warned that a clear distinction should be made between grass-fed British meat and cheap imports. “We should be considering British meat in its own category, recognising its sustainability and dense nutritional value,” she said.

“The meat question will spark debate,” said Soil Association CEO Helen Browning, “but the evidence is clear that dietary change will be needed to enable more nature-friendly farming. The wider uptake of agroecology, as recommended in the strategy, would see livestock, and particularly ruminants, reintroduced into rotations and animals playing an important role on the land, but our diets must adapt for such an approach to be viable.”

Ruth Westcott, campaign co-ordinate on climate and nature for Sustain, added that it is not fair to expect consumers to take responsibility for meat reduction. “We would like to see incentives for the private sector to use more veg and better standard meat and dairy in ready meals and restaurant menus. We would also like to see British farmers supported to transition to higher welfare, more sustainable farming and to ensure they aren’t undercut by low-standard, low-welfare produce from overseas. ”

Proposed tax “will not drive reformulation”

Another contentious area of the report is the salt and sugar tax. While Kate Halliwell, chief scientific officer of the Food and Drink Federation (FDF), said manufacturers “welcome the intent” of measures that would boost access to and affordability of food and drink, the group said the salt and sugar tax would “ultimately impact those families who are already struggling to make ends meet”.

“After many years of cost pressures, businesses in our sector are already operating on very tight margins, and any further costs would simply have to be passed on to the consumer in the form of higher food prices,” Kate said. “These taxes will not drive reformulation. Food and drink manufacturers have been voluntarily lowering fat, salt and sugars in recipes for decades as well as reducing portion size, but it takes time to change much-loved products.”

Others were more supportive of the salt and sugar tax – Barbara Crowther, coordinator of the Children’s Food Campaign, called it “bold and ambitious”.

The Soil Association’s Helen Browning urged even stronger action. “The proposed tax on salt and sugar is hugely important and should be enacted by the Government, but we would urge further action more squarely targeting ultra-processed foods. The French government has introduced a percentage reduction target for ultra-processed foods in the diet, and we should be introducing a similar target in England,” she said.

Roger Kerr, chief executive of OF&G (Organic Farmers & Growers) said the report contained “much to applaud” but called for a better representation of organic agriculture. “We need a clear pathway for a transition to organic/agroecological farming laid out for farmers, one that is supported by governments and the market. As a first step, policy needs to ensure on-going support for organic farming systems and embrace more environmentally benign approaches.

“Therefore, OF&G advocates maintaining diversity in agricultural systems. If Mr Dimbleby is setting out his foodtopia – then organic, as he has previously stated needs to, needs to be part of it,” he concluded.

While some of the report’s recommendations are up for debate within the food and drink sector, many of the historic reforms have been applauded. With supporters ranging from celebrity chefs like Jamie Oliver, Prue Leith and Tom Kerridge to food policy and sustainability experts, there is good reason to hope for positive change on the horizon.