The evolution of storecupboard essentials 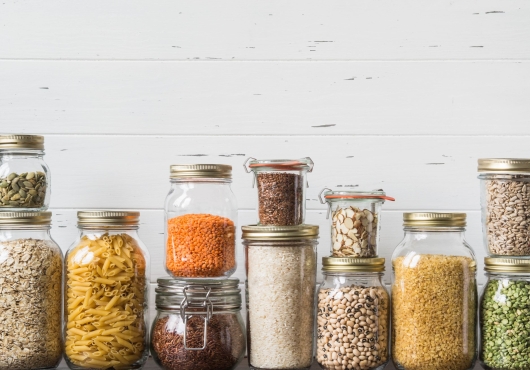 We’ve been storing food in some way, shape or form for centuries. From pantries to modern day storecupboards, the way people have cooked over time has always relied, in part, on some select ingredients that they can grab at a moment’s notice. According to a report from insights and analytics company Future Thinking in September 2021, which looked at consumers’ food attitudes and habits in 2019, despite having one of the longest working weeks in Europe nearly two thirds of people said they enjoyed cooking from scratch. However, the report also found that more people were buying pre-prepared convenience foods. Whether basic ingredients for whipping up a meal from scratch - something consumers rediscovered during lockdowns - or using pre-prepared staples to save time and effort, the storecupboard is as important in 2021 as it was in Victorian times. But are those essentials the same? Or are people reaching for different things when they grab ingredients these days?

People are more abundant in what they store

The store cupboard isn’t going anywhere, says food and drink historian Seren Charrington-Hollins, but what’s in it is changing all the time along with what people are buying to stock it. “If you look in people’s storecupboards now, I think you will find a lot more in terms of selection. If you go back even to the 1950s, you would find things like individual herbs, for example, but there would be less of a selection. Even if we go back to the 1930s you would find things like mild curry powder, or maybe parsley and dried herbs but what you would not find is the array of spice mixes that we now have. Now we have pre-mixed herbs, spice mixes, blends etc. If you look in the supermarkets it’s mind-boggling what they sell.” That variety and selection isn’t limited to spices and seasonings, but extends across different storecupboard essentials, from flour to pasta and rice, she says. “Again, if you go back you might have seen dried macaroni, tapioca, pudding rice and those were staples. That’s all changed. We are now a generation that is keeping a variety of things like pastas and rices, especially different types – so we are more likely to have things like sushi rice or arborio rice than tapioca or pudding rice.”

Changes to our storecupboard essentials relate closely to our reasons for storing food, says Charrington-Hollins. “People are more abundant in what they store,” she says. “Going back, we stored foods because they were staples – things we would reach for every day – but now we store everything. We store in a different way. We don’t store because we need to make sure we have these staples to use every day or every week. I think a lot of people use the pantry or storecupboard to put ingredients where we might use them one day, but not every day. We are not reliant on it anymore because you can get food from anywhere now, whenever we want it.” That change in why we store food nowadays explains why the contents of our storecupboards have changed, says Charrington-Hollins. “For example, tinned fish used to be an absolute staple. There weren’t very many housewives 50 years ago who wouldn’t have had tinned sardines, pilchards etc. But it’s not really the type of thing we store now. I’m not saying people don’t have the odd tin of tuna lying around, but it’s not a storecupboard staple anymore. Maybe because we don’t need to have so many tinned goods – we’re more likely to have fresh products because we have refrigeration. Similarly with preserves, people used to preserve things in periods of abundance to store away for the rest of the year. But now we don’t tend to preserve things because we can just pop to a shop and get it. We are more likely to buy in preserves if we want them. Tastes have changed, how we eat has changed, and that means what’s in our cupboards has changed. The pantry has become something we enjoy doing, it’s more about frivolity than frugality and necessity and that’s where it’s changed.”

A versatile way to enliven palates

Despite changes in variety and today’s consumer’s love of global produce, storecupboard ingredients still relate to the categories that have occupied space on our shelves for decades – from staples like rice and pasta to those jars of condiments, chutneys and relishes, and spices, seasonings and herbs that we use to jazz up our meals. Becky Vale, marketing director at Tracklements, sees chutneys and relishes as the “stalwarts of the storecupboard”. “Who among us hasn’t, at some point or another, had a harried look in the fridge and been at a loss for inspiration, only to open the cupboard and see the reassuring sight of a jar of chutney, or a much loved relish with which to liven up a meal or transform a lump of cheese and a cracker into a veritable feast,” she says. “I simply can’t imagine a storecupboard without a collection of mustards, chutneys, relishes, pickles, savoury jellies or sauces in it.  Each one has a particular use, each one is the finishing touch to a meal without which it just isn’t complete. Another reason they’re an essential part of every kitchen storecupboard is their sheer versatility – whether you’re looking for something to make a sandwich sing, or to jazz up a stew, something to bring out the best in a piece of cheese, or to perfectly complement a special meal without overpowering it.”

The popularity of nostalgic food – driven perhaps by the role of food in comforting the nation through testing times – has meant that traditional condiments are enjoying buoyant sales, adds Vale, with Tracklements experiencing a 60% increase in the year to date. “We’ve seen from our research that the traditional essentials have really stood the test of time: mustard is still as useful and popular as ever as is our Strong Horseradish & Cream. This past year in particular, condiments to complement traditional, comfort foods like roasts have seen really strong sales.” Unsurprisingly, the most frequently-bought items are the most frequently used, says Vale, but Tracklements have also noticed that more products are being added to the ‘must-have’ list, from chilli jam to mayonnaise which are now household staples.

Scratch cooking is a boon to storecupboards

Our love of storecupboard staples has been further bolstered by a renewed interest in cooking from scratch. “With all the interest in food, especially home cooking from scratch over the last 18 months, people have started to look at their storecupboards and see how they can use up jars, tins and packets in a different way,” says Maria Whitehead MBE, owner of Hawkshead Relish. But our newfound love of getting creative in the kitchen doesn’t necessarily fit with people’s busy lives in 2021, which is where some of the new storecupboard staples come into their own, according to Michael Price, owner of Price’s Spices. “People are time poor and often cook from storecupboards. If you think of a chilli, you’ve got tinned tomatoes, kidney beans, rice, some kind of seasoning. Over the last few years I’ve noticed that when people find something that works for them, like a chilli mix or a fajita mix, they stick to it rather than going through the faff of adding each individual spice. They want to use a seasoning or spice mix that’s been put together, properly balanced and that they know tastes great. They want to feel that they have cooked from scratch but not have the hassle. I think shortcuts are definitely the way forward and I’ve seen the repeat business of my spice sachets get a lot bigger. I have probably got at least a couple of dozen customers who buy either jerk seasoning, chilli or fajitas and buy 15 sachets at a time.”

Having someone else do the “hard work” when it comes to taste and flavour is something that Vale says attracts people to Tracklements, allowing them to access a “powerhouse of flavour and taste” by simply opening a jar. “Everyone needs a helping hand in the kitchen sometimes,” she says, “whether it’s scratch cooking or whipping up a meal in minutes. Some people call them ‘cheat’ ingredients, but we agree with Jamie Oliver who said in his recent recipe book 7 Ways: ‘I use a lot of condiments in this book…They guarantee flavour and save hours of time in preparation…Over the years, the press have taken the piss out of me for using these so-called ‘cheat’ ingredients, but I think cheat ingredients are great! They help keep food exciting.’”

The use of storecupboard essentials as the basis for meals cooked from scratch, or shortcuts to add flavour quickly and easily, is something producers and retailers are honing in on, with Whitehead saying that packaging is now used to offer suggestions that extends the use of certain products beyond their traditional uses. It was also the motivation behind a recipe book released by Hawkshead in 2019, showcasing its best-selling products in more than 60 recipes. “For many years I have used our products as part of recipes for everyday dishes at home, many cooked from scratch when I get home from work, so cutting a few corners and using what is in the pantry is a great way of adding flavour when time is short.” Similarly, Price includes recipes on his website to encourage customers to think outside the box when it comes to his seasonings, rubs and sauces. “Things like seasonings are so useful for transforming traditional meals,” he says. “Take things like my meat rubs – you can use them on anything from a roast beef dinner to blinging something for the barbecue. It’s about showing people how versatile the products are and how they can work together.” Price also encourages customers to think of how his products will work together, like using a chilli jam to complement a dish made using one of his seasonings. “I try to interact with people and make sure they’re buying the right products for them, so they won’t just sit on the shelf, but they will use it and experiment with it. f people are buying stuff then only using it once, then maybe they’re buying the wrong products, so I try to help them and inspire them.”

That said, the longevity of storecupboard ingredients is one of their many bonuses, meaning even if you don’t use them every day, they’re there waiting for that occasion when you need them. “The beauty of them is that they last a long time, even after opening,” says Whitehead. “They improve for a long time after production as the flavours develop, so we would always want to leave them a good six months before using them, but I have some in my cupboard two years on. Obviously once opened you need to store them in the fridge and the space becomes an issue, so if you can use them it’s a great idea and so much better than wasting them.”